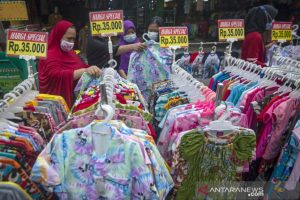 The Bank Indonesia Consumer Survey (SK) in May 2021 showed that consumer optimism about economic conditions had continued to strengthen.

According to an official statement from Bank Indonesia received in Jakarta, Wednesday, an improvement in consumer confidence occurred in most categories of the expenditure and education level, as well as the respondent age group.

Spatially, consumer confidence improved in the six cities surveyed, with the highest being in Medan and followed by Surabaya and Manado.

Based on the decree results, the strengthening of consumer optimism in May 2021 was driven by improved consumer perceptions of the current economic conditions, albeit still being in the pessimistic area, or below 100.

This was driven by improved perceptions of job availability, income, and the timeliness of purchasing durable goods.

Meanwhile, consumer expectations for future economic conditions were observed to be relatively stable as compared to achievements in the previous month.

Expectations of job availability rose, while high hopes were pinned on business activities and income, although lower than the levels in the previous month.