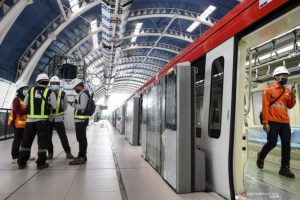 President Joko Widodo (Jokowi) is optimistic that the light rail transit (LRT) trains produced by state-owned PT INKA (Persero) can be exported to other countries.

“For other countries, we have exported trains to Bangladesh and the Philippines, and we are optimistic that the LRT will also be like that,” the president remarked while inspecting the Taman Mini Indonesia Indah (TMII) LRT Station and Harjamukti Cibubur Station, Jakarta, Wednesday.

The LRT tested by President Jokowi this morning is the Jabodebek LRT, which is targeted to become operational by mid-2022.

The LRT train was produced by PT INKA, while PT Adhi Karya was tasked with the LRT construction work.

The president emphasized that Indonesia’s industry direly required to gain experience in construction and building LRT trains. This would come in handy when the LRT manufactured by Indonesia is exported to other countries. Construction technology by companies in Indonesia will also be required by LRT-importing countries from Indonesia.

“I think this type of development experience is what we need, so that we have experience in building LRT and trains by PT INKA. Hence, this will become the foundation if we have to build LRT for other countries,” the president noted.

Based on information from the official website of PT. KAI, as the operator of the Jabodebek LRT, there are six trains in each Jabodebek LRT series.

Under normal conditions, each series is capable of serving 740 passengers comprising 174 seated positions and 566 for standing riders. During peak hours, 1,308 passengers can be accommodated.

The Jabodebek LRT train utilizes resources from the third rail, with a power supply voltage of 750 VDC. The Jabodebek LRT is designed to reach a speed of 90 km/h, while the maximum operating speed reaches 80 km/h.