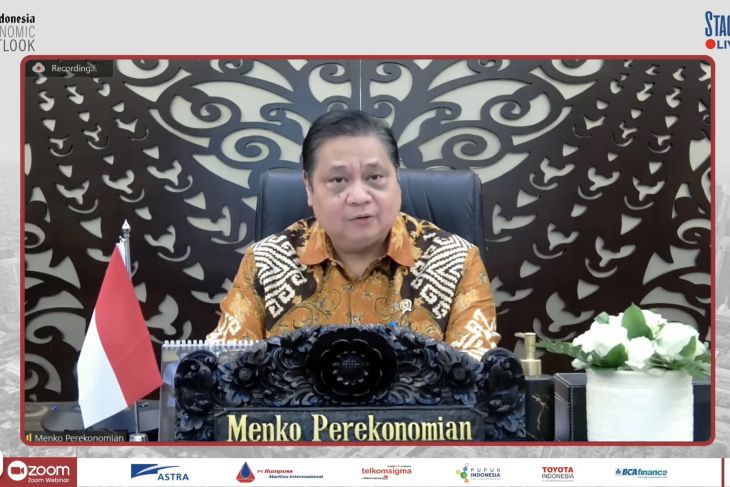 The government will continue to maintain the economy to grow above five percent until the third quarter of 2022 amid global turmoil and uncertainty, Coordinating Minister for the Economy Airlangga Hartarto stated.

Minister Hartarto said that if the economy is able to grow above five percent by the third quarter, then the annual growth target of 5-5.2 percent for this year will be achieved.

“The figure in the second quarter is expected to be slightly more than five percent. If we can maintain it until the third quarter, then the growth target of 5-5.2 percent by the end of the year can be achieved,” the minister noted at the Mid-Year Economic Outlook 2022 event here on Tuesday.

Minister Hartarto said this optimism was in line with the economic growth that was still driven by demand, including consumption, investment, and exports, which grew positively. Meanwhile, from the supply side, almost all sectors also grew positively in response to the surge in demand.

In detail, in the first quarter of 2022, GDP from household consumption grew more than 4.34 percent, while consumption of Non-Profit Institutions serving Households (LNPRT) also increased 5.98 percent.

“Government consumption in the first quarter was relatively negative, but this can be compensated for in the third and fourth quarters,” according to the minister.

Meanwhile, GDP growth from the business sector will also encourage the achievement of Indonesia’s economic growth this year, given that the 2022 first-quarter realization is quite positive.

For transportation and warehousing, the growth had reached 15.79 percent; other services, 8.24 percent; information and communication, 7.14 percent; electricity and gas procurement, 7.04 percent; and accommodation and food as well as beverage provision, 6.56 percent.

The realization of Indonesia’s leading indicators also shows good prospects, for instance, the Consumer Confidence Index (IKK) that had reached the level of 128.2, retail sales of 15.42 percent, core inflation of 2.86 percent, and the consumer price index (CPI) of 4.94 percent.

Meanwhile, he noted that in terms of the external sector resilience, Indonesia is also still solid, as was apparent from the trade balance that reached US$24.98 billion during the first quarter of 2022 and the current account to GDP averaging 0.07 percent of the GDP.

Moreover, foreign exchange reserves also reached US$136.4 billion that was deemed sufficient to meet six months of imports and a foreign debt ratio of 32.3 percent to the GDP in May 2022.

“We are still optimistic that economic growth will reach 5.2 percent in 2022, and in 2023, we hope this figure would increase to 5.3-5.9 percent,” Minister Hartarto stated.