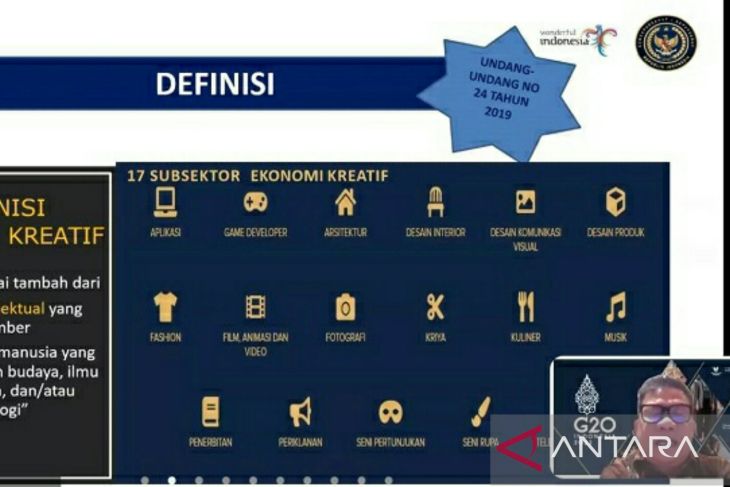 The gross domestic product (GDP) from Indonesia’s creative economy sector in 2021 grew by 4.04 percent, contributing quite well to the national economic growth.

“In 2020, the creative economy sector was corrected 1.70 percent. However, in 2021, the GDP of Indonesia’s creative economy sector has grown by 4.04 percent,” Director of Music, Film, and Animation of the Ministry of Tourism and Creative Economy Amin Abdullah noted through the release of the Creative Economy Movement (Gekrafs) Samarinda, East Kalimantan Province, Monday.

The Gekrafs meeting, which included a talk show on the creative economy welcoming the relocation of capital city to Nusantara Capital City, was held offline and online.

Abdullah remarked that the creative economy sector in 2020 had absorbed 19.39 million workers in Indonesia, with the majority, or 39.20 percent of them, being Generation Z and millennials in the age range of 25-40 years.

Out of the total growth in the creative economy sector, the highest growth contribution came from the television and radio sub-sector at 9.48 percent, applications and games at 9.17 percent, and the architecture sub-sector at 7.23 percent.

Abdullah noted that the creative economy is an added value of intellectual property that comes from human creativity based on culture, heritage, science, and technology.

He cited an example of a food entrepreneur, who makes products whose ingredients comprise nuts, flour, eggs, garlic, salt, and others. The price of the total raw materials is Rp750.

According to Abdullah, the creative economic ecosystem for various parties should be well-understood, especially for creative economy players, so that their businesses can be sustainable while they remain connected to the business chain that is being built.

The connected system that supports the value chain of the creative economy is creation, production, distribution, consumption, and conservation that can be pursued through the collaboration of Pentahelix or five parties, comprising the government, academia, communities, entrepreneurs, and the media.

The Pentahelix collaboration is important to provide added value to the product, so that the product has high competitiveness, is easily accessible, and is legally protected.